Sarah Dares, TH to be Sexy

SARAH DARES, TRIES HARD TO BE SEXY
by Nestor Cuartero

Sarah Geronimo is all of 18 now,yet untouched by first love and still dreaming of the day when young boys will pay her a visit to court her, with roses and chocolate on hand.

Not that, the hitmaker-artist is advertising, she clears as if in self- defense." Pero siempre po, masarap din siguro yong nililigawan ka", she smiles self- consciously.

Sarah says she has never experienced courtship, has never fallen in love. In highschool, at the UST, she remembers, some boys did send her feelers, but they remained just that. Nakakainis.
"Hindi ata ako ligawin" she said in self - mockery. Sarah is quite good at mocking herself, a sign of self - confidence, if not nervousness, that she has often brought his same sensibility to her live shows.

Her humor, unlike that of professional stand-up comedians, is self - deprecating. Which sits very well, indeed, among her millions of fans, who, just like her, love to laugh at themselves.

Sarah is in the midst of preparations for her second major concert at the Araneta Coliseum on July 14. Her producer, Viva Concerts, has convinced her to get a little more daring this time in terms of costumes and choreography.

Asked if she will transform into a vamp after the concert, Sarah wondered what a vamp was in the first place. She also refused any offer for breast augmentation and the like. " Kahit pa po libre"

Sarah Geronimo in Motion presents the new Sarah, as a dancer - performer with her guests Gary V,., Sam Milby, Jericho R., John Pratts, Mark Bautista, Louie Ocampo, Aiai Delas Alas. It will be followed shortly by a birthday concert on July 21 at Clark Expo in Pampanga. 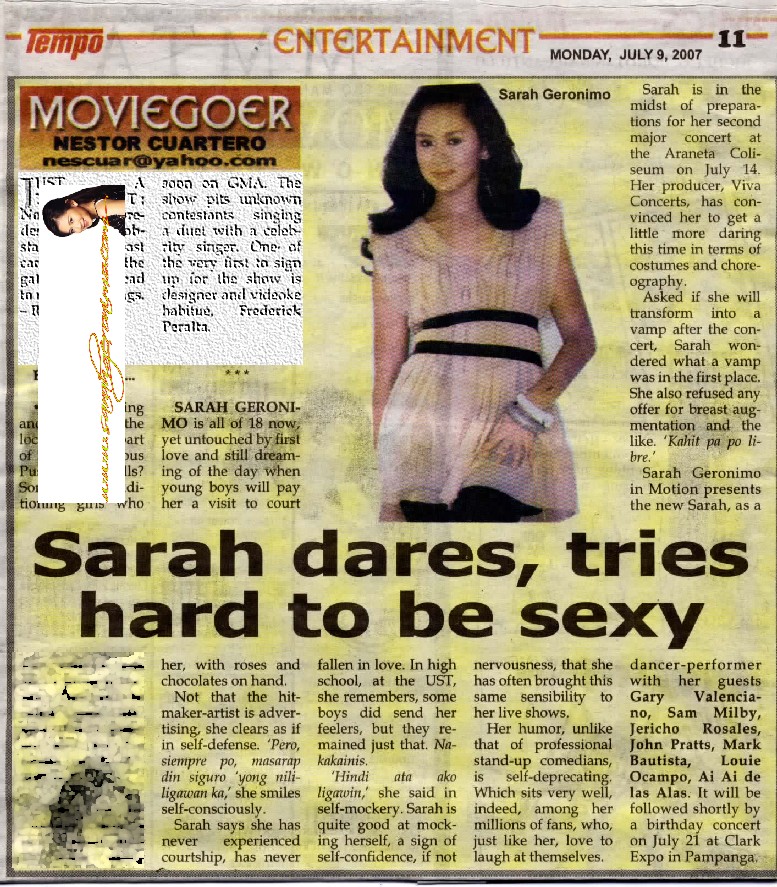