So my journey begins with a 4 hour drive from home (Reno, NV) to San Jose Airport, followed by a 4 hour flight to Atlanta, followed by a 2 hour flight then arriving in Dayton, Ohio - August 17 @ 9am. I planned my trip about 2 weeks in advance, so I was not aware of when Sarah and the rest would arrive... by luck (or coincidence), I received news that they would arrive only MINUTES after my own arrival at Dayton... so I prepared myself for the Geronimos' reaction to my presence in the other end of the US.. 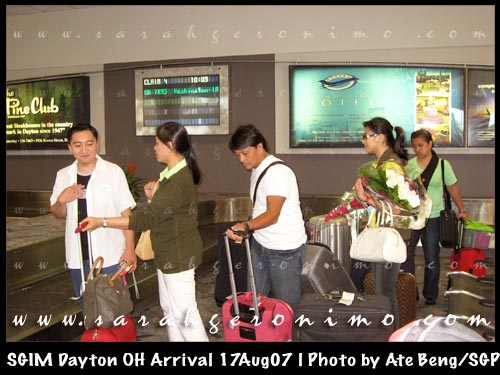 Upon their arrival (which was no more than 30 minutes after my own arrival), I let the welcoming crowd jump on them with pictures and gifts and stood to the side. Tito Delfin was moving around them, and spotted me instantly, saying, "Oi Anthony.. kamusta ka na?" From his expression, nagulat din cya but didn't seem that surprised. Princess Bautista was the second to find me and she couldn't believe I was here, saying (in Bisaya) "You're here too?? Is this where you're from?" To which I replied, "Nope, I live about 3000 miles away from here.."

The group went to get their luggages at baggage claim, and I took this opportunity to say hi to Sarah, who was (surprisingly) not surprised to see me. I felt slight nervousness as I approached her, as it was near 1 year since I had been in her presence. I went to Tita Divine who had been busy finding her luggages. She pointed to one and said "Atin yun" and I grabbed it for her. It was then that she recognized me


patikim lang muna yan.. this is only the first half hour encounter of the first day.. ate Beng paki-check if my kwentos are actually right, at those times when you were with me