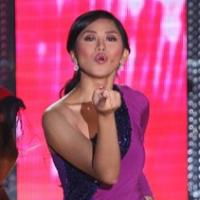 STAR WITH THE ATTY. TO THE STARS: New singing sensation, Sarah Geronimo with her Attorney., Michael J. Gurfinkel, after receiving her very 1st U.S. Visa, as an â€œAlien of Extraordinary Abilityâ€ allowing her to come to the U.S. for her four-city â€œNight of the Championsâ€ concert tour. Atty. Gurfinkel was able to secure the visa approvals for the entire entourage in only 2 _ days from filing.

Sarah Geronimo came from humble beginnings. Money was always tight around the Geronimo household, but her talent and perseverance made her a success beyond her wildest dreams.
â€œMy dad took out loans just to buy my school supplies. Sometimes we didnâ€™t have money left to buy food,â€ recalled Sarah, â€œbut we always managed to pull through somehow.â€
The countless auditions, and the many singing contests she entered, often produced heartbreaking disappointments that could have easily broken her young spirit. Instead, these setbacks motivated Sarah to work even harder at her blossoming singing career. Through it all, her loving parents had always told her not to give up her dream of becoming a star someday, just like her idol, Regine Velasquez.
Her dream became a reality last year, when Sarah was the Grand Prize winner on the â€œStar For A Nightâ€ contest. She won a million pesos, signed a recording contract with hit factory Viva Records, and a new star was born. Like Regine, Sarah rose from humble beginnings to superstardom. Viva head honcho Vic Del Rosario, Regineâ€™s mentor, is also guiding Sarahâ€™s career.
â€œI think that one day, Sarah will take her place in the galaxy of stars along with Regine,â€ said Del Rosario. â€œI see a lot of the same talent and drive in her.â€
This year, Sarahâ€™s â€œNight of the Championsâ€ U.S. Tour will take her to several cities, including New York last September 18 (Saturday), Chicago on Sept 26 (Sunday), Los Angeles on October 2 (Saturday), to name a few.
Sarah, like Regine, believed that performing in the U.S. is a mark of stardom. You have â€œnot arrivedâ€ until your talent is recognized by your kababayans in the U.S. That was the reason why Sarah was so excited at being able to go to the U.S., for the first time in her life, for this concert tour.
However, obtaining entertainer visas for Sarah, and other champions Rachelle Ann Go, Mark Bautista and Christian Bautista in a timely fashion was no easy task. She, along with the other singing champions are all mostly minors, and mostly first time visa applicants. Vic del Rosario sought the help of none other than the famous â€œAttorney to the Starsâ€, Atty. Michael J. Gurfinkel, to make sure they got their visas without a hitch.

Last September 14, 2004 the Champions finally arrived in the U.S.
Sarah, who had never even had a passport, is now a proud holder of an O-1 Visa, as an â€œAlien of Extraordinary Ability,â€ and is enjoying her first trip to America with her parents. After all the hardships, her talent and perseverance enabled her family to realize their dream of visiting the United States. They will visit Disneyland, whose theme song sums up the fortunes of the Geronimo family: â€œWhen you wish upon a star, makes no difference who you are. Anything your heart desires will come to you.â€ Indeed, another fairy tale come true!
The Law Offices of Michael J. Gurfinkel, who handled Sarahâ€™s visa, is a full-service immigration firm with offices in Los Angeles, San Francisco, New York, and Makati, Philippines.