Sam Milby says he prefers to date a non-showbiz girl 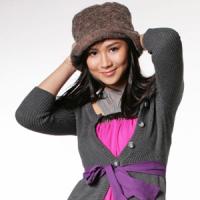 It’s been over two years since his last relationship, but Sam Milby admits he has yet to fall in love again. The Idol star, who was last linked to fellow actor Anne Curtis, says it’s not true he’s become choosier when it comes to love since it’s not hard to be attracted to someone in the industry. Even though the Fil-American heartthrob woud prefer to date someone outside of showbiz, he says it’s not impossible to fall in love again with a co-star. “I don’t see why not. Lalo na sa business na ito, ang daming magaganda, ang daming mababait,” he says.

Sam says he feels more cautious now about getting into a relationship, especially if both of them are celebrities. “I will admit that if you do have a showbiz relationship, mahirap. So sometimes naiisip ko siguro mas madali to have a non-showbiz na girlfriend. The thing is, kahit sinasabi ko na gusto ko ng non-showbiz girlfriend, the fact is, I work in showbiz, I work with all these women and I spend a lot of time with them. You can’t help whom you fall in love with. If you’re with that person all of the time, there’s a chance you can fall in love with them. Even if I say ayoko ng showbiz girlfriend, You can’t help stopping something like that. If I fall in love with her, I fall in love with her. We’ll fall in love, you know what I mean?” he said during the 2010 Cinema One Originals presscon at the ABS-CBN compound last October 26. Sam stars in Third World Happy, one of the seven films included in the annual film festival.

Sam also believes that the next time he gets into a relationship, he will not have the need to deny it or hide it from the public. “I think if it’s showbiz, people are going to find out about us and I think the girl would want the guy to be proud in a way. Pero ngayon wala pang girl,” he says.

Of his Idol co-star Sarah Geronimo, Sam says that it’s not hard to see the successful singer-actress as potential girlfriend material. “With Sarah, when you work with her you get very kilig. She’s trustworthy in a sense na kung ikaw yung boyfriend niya, wala kang duda. He would have no doubt na may iba pang guy or anything like that. She’s very truthful, very honest, ang bait bait sa lahat ng tao,” he shares. Sam says with his busy schedule, he is not in any hurry to get into a relationship. The Ohio-born actor shares his philosophy when it comes to loving someone. “Finding a perfect love is not about finding the perfect person. It’s about loving an imperfect person, perfectly. You’re not going to find the perfect person,” he says.